Bats inhabiting attics are becoming a more common problem homeowner and businesses are facing. Our Experts have been performing safe, effective bat removal services for over 20 years!

If you have discovered bats in your attic, you want to get rid of them as soon as possible. Like many other animals the longer the bats remain in an attic the more extensive the damage they will create. Secondly carry fatal diseases such as rabies and histoplasmosis. Histoplasmosis is not a disease that bats carry but is caused by a fungus in their excrement (bat guano). Bats should never be allowed to remain in an attic, consult a bat control expert and have them safely removed. 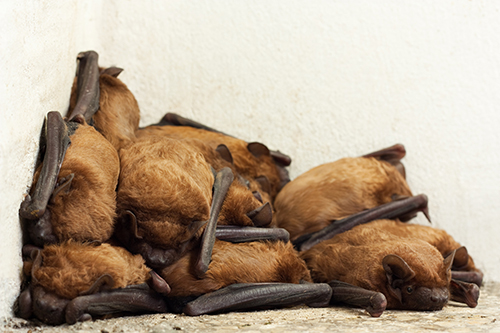 How do I know if I have bats in my attic?

Unlike other animals bats may go undected for quite sometime. Common signs to look for are piles of bat guano droppings on the ground around the home. Bats will excrete guano as they leave and enter the den. Another sign to look for will be streaks of black or gray marks on the side of the home. Once the bats have formed a large enough colony you may hear squeaking sounds coming from the ceiling or walls. Often times homeowners will not even know they have bats until they see one fly into the homes attic or worse one makes its way into the homes living space.

How did bats get into my attic?

This is a very common questions often posed by homeowners. Bats are able to squeeze through very small cracks and crevices. Often times bats enter an attic through uncapped ridge vents, loose soffits, and other small openings along the roof line.

How to get rid of bats in the attic?

The best most humane method to get rid of bats in an attic is an exclusion process. An exclusion will allow the bats to naturally relocate without placing harm or stress on the animals. Bat removal must be done in accordance with the laws of the Ohio Department of Natural Resources. Due to the importance of a healthy bat population, laws have been enacted by states to protect them. To perform a bat exclusion or any type of work that inlolves a bat the person must have a nuisance wildlife control permit issued by the Ohio Department of Natural Resources. All of our Wildlife Control operators of Animal Control Solutions possess this permit.

All bat removal and bat exclusions are perform in occordence with the laws of Ohio. We perform Safe, Effective, Humane Bat Exclusions throughout Cincinnati and surrounding areas of Ohio.